Tracks for Internal Bi-folds: What You Need to Know

Bi-fold doors offer a fantastic way to expand the interior of your home.  With such an enormous opening separating one room from another, you’ll effectively create a single larger living space – one that can be easily broken down into two separate ones.

Internal bi-folds are a popular choice for dividing kitchens from dining areas, and hallways from lounges.  They’re built from a series of panels, which connect to one another in a concertina.  This allows them to be made far larger than ordinary doors.  Each panel is in turn connected to a track, along which the panels can slide back and forth.  It’s this part of the door that we’re going to shine a light on in this article.

Why Do Bi-Folding Doors Need Tracks?

Can you imagine a bi-folding door that didn’t have any tracks?  It’d be able to swing all the way out across the room.  When we consider that many bi-fold doors are more than seven metres long, it becomes clear that in practice such a door would be unwieldy and irritating.  You’d need to wrestle it into position every time you went to close it.  Clearly, bi-folding door track systems serve an important purpose.

That said, restricting the door’s movement is just one purpose of a track for bi-fold doors.  They also support the actual weight of the door.  The pivots aren’t built to bear such a load – they function more as an anchor, around which the door itself can move.  Without a strong, supportive guide rail, a folding door would instantaneously collapse beneath its own weight.

Of these, the former is less intrusive.  A rail at the bottom will ruin the illusion of a single, seamless space when the door is open.  Moreover, unless you’ve gone to the trouble of setting the rail into the floor, you’ll run the risk of tripping over it every time you move from one side of the door to the other.

Your ultimate decision will depend on your personal taste, and the particular demands of your building.  Each option is user-friendly and suited to most sorts of properties, and so your decision will primarily be informed by whether you want to conceal the rail itself.

Installing a bi-folding door track is perhaps the most demanding part of installing the door: once it’s in position, all of the other pieces tend to fall into place.  For this reason, it’s important to treat this stage with the required care and attention.  Let’s think about how to install a bi-fold track.

First, you’ll want to take a hacksaw and cut the track so that it matches the length of your opening.  While the carriages aren’t going to run all the way to the end of the track, it’s worth aiming for as snug a fit as possible.

Next, slide the carriages into the track.  The small stops will go into the centre of the track, followed by the wheeled hangers, and then the pivot socket.  Then you can attach the track to the surface (be it the floor or the ceiling).  It’s important not to over-tighten at this stage; a little bit of looseness will make it easier to hang the doors later. 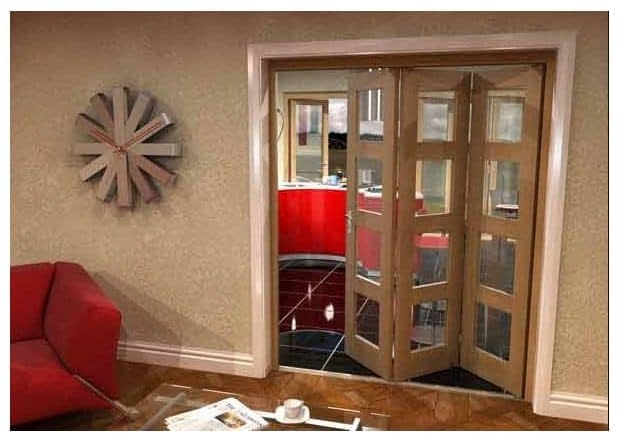 Removing Bi-fold Doors from Their Tracks

To remove a folding door from the tracks, you’ll need to remove the guide pin from the pivot socket.  In most cases they’re spring-loaded, making this quite straightforward.  Be sure that you’ve enlisted the aid of a friend, however, as folding doors can be exceptionally heavy.

How Do You Repair Bi-fold Door Tracks?

To diagnose the problem, open and close the door, keeping an eye on the roller on the inside edge to ensure that it is properly seated within the track.  Next, check that the pivot pins are engaging properly with their respective sockets; looseness here will reliably misalign the entire door.  In most cases, the bottom pin will be threaded, allowing you to make adjustments to the pins and thereby correct alignment problems.  If there isn’t enough clearance at the top or bottom of the door, then this might be the solution.  When pivot pins wear away, you’ll need to re-fill the socket with a dowel plug before re-drilling another in its place.

If the track itself is undamaged, and the casters have simply become detached, then the best course of action is to simply loosen the door and re-seat it.  If the track itself has become warped or bent, then you’ll need to remove it and replace it with another.  Such cases are vanishingly rare when the door has been properly installed.

If you’re going to remove and reseat your door, then be sure to give it a thorough clean – particularly if it’s a floor-mounted track.  Loose debris can easily accumulate in the gap, where it might knock a door out of position.  Break out a can of WD40 and lubricate the mechanism, scooping out any loose dust particulates as you go.  When you’re done, you should have a rail that’s as good as new.